My first hand made Bullwhips

I have now completed my first 10 foot bullwhip. Also, I finally tied the transition knot on my first bullwhip. The 10 foot whip took much longer to complete than the 7.5 foot whip. I used an entire hide (59 dm) for just the overlay. After I finished braiding the overlay, I measured all of the extra length I ended up cutting off in order to determine the actual amount needed for the next 10 foot whip. I did a much better job cutting the strands straight, beveling, and stretching out strands on this whip. Also, this whip has a lead loaded handle (in the end knot), giving it more weight.

I wasn't extremely happy with the size and shape of my foundation knot... I ended having to do a 4pass turk's head knot instead of 3. Other than that, the whip cracks really well, I feels like it's well weighted, and has held up this far with daily use. 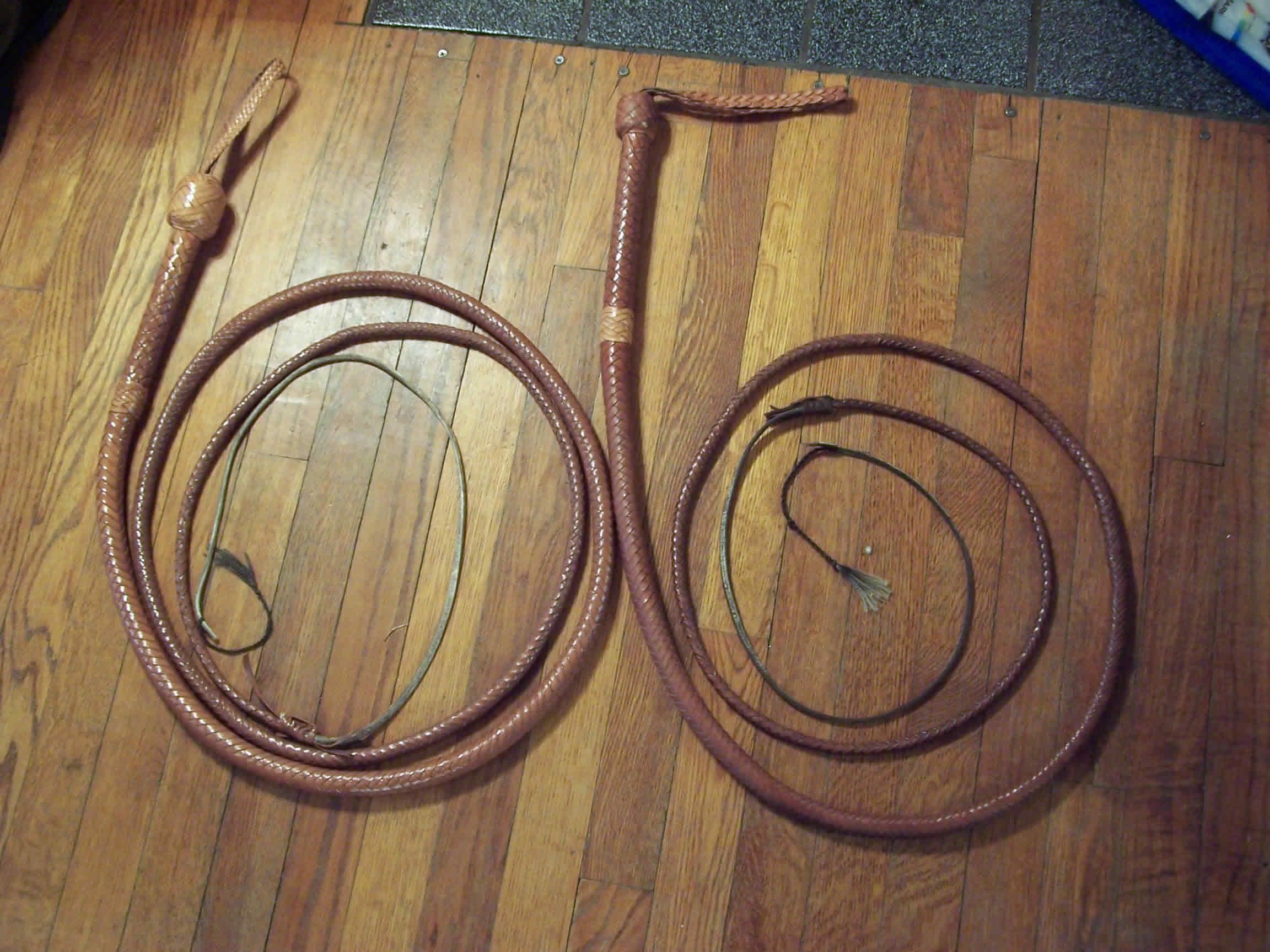 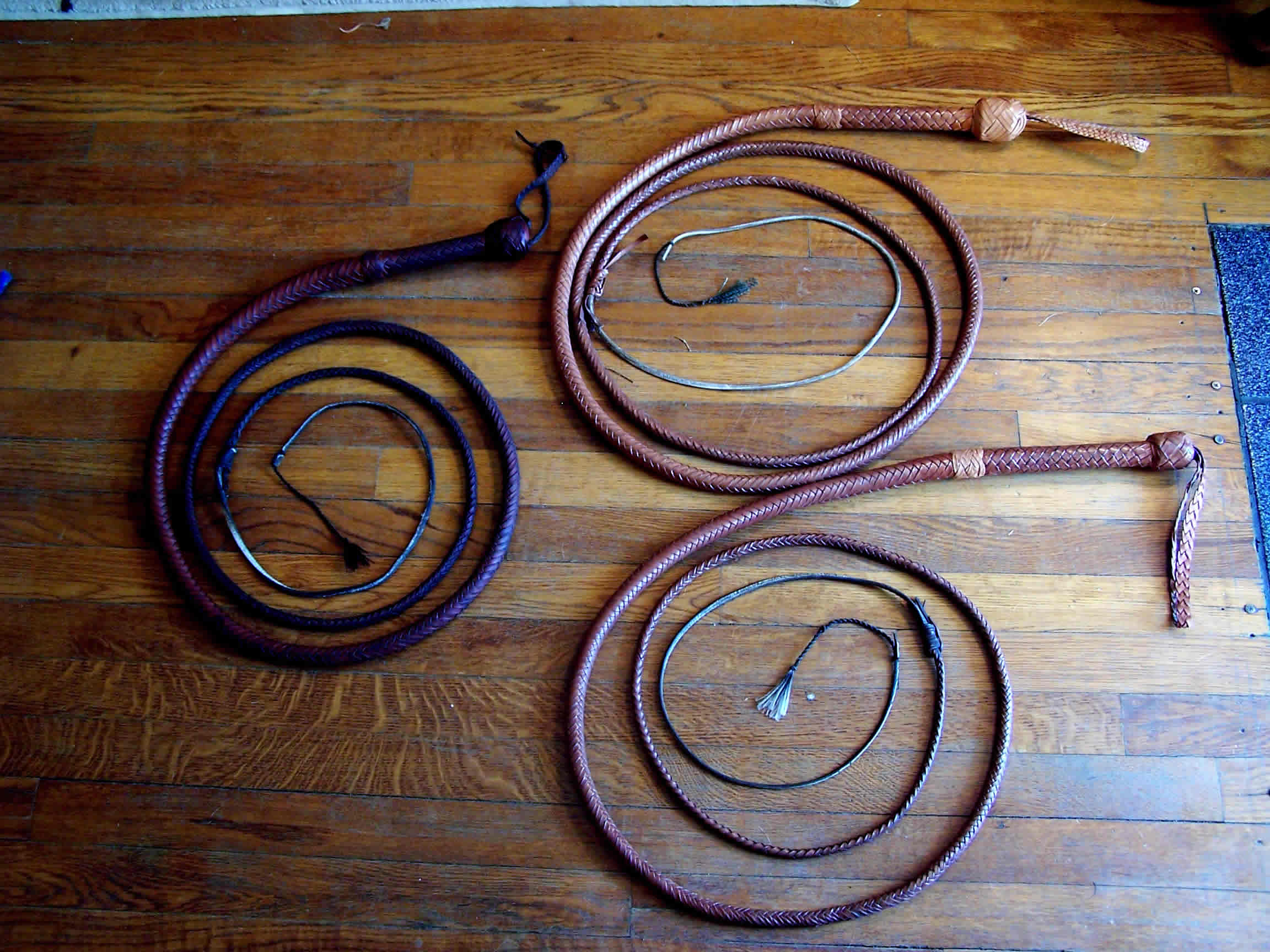 I re-plaited the overlay over thanksgiving break. It was seriously loosening up and getting... as Evan would say..soft as lamb stool. It cracks a lot better now. 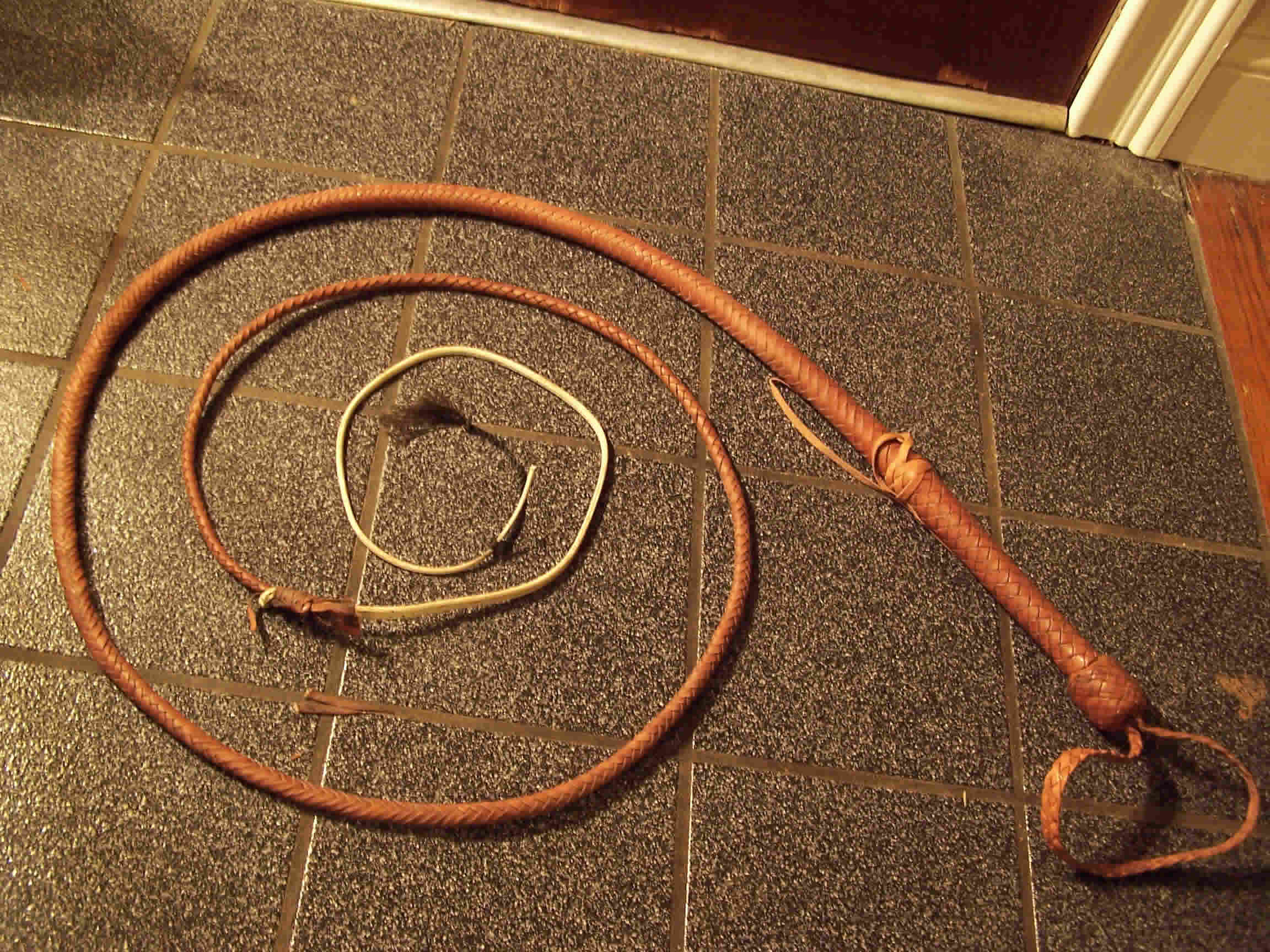 To begin, I have enjoyed bullwhips since seeing Raiders of the Lost Ark. Evan and I have always had at least one cheap whip that we used outside to primarily hit stuff and swing from trees. Several years back, not long after I discovered the original whips made by David Morgan (www.davidmorgan.com), I bought my first real whip for a measly ~$700 (prices have gone up since then). That whip was and still is rediculousy awesome. It is perfectly balanced and super heavy. About a month ago, I discovered Louie Foxx's web page www.bullwhips.org and was really inspired to build my own. His page is basically a blog of his experiences in making all kinds of whips from his first whip until now. He sells a pdf book that I have followed very closely in constructing this whip. Also very helpful were three books I purchased at the same time:

These books are also recommended readings in Louie's online book.

Here is the Kangaroo hide from David Morgan that showed up a few weeks ago. It struck both BJ and me as being really small! The hide was labeled 55dm^2. 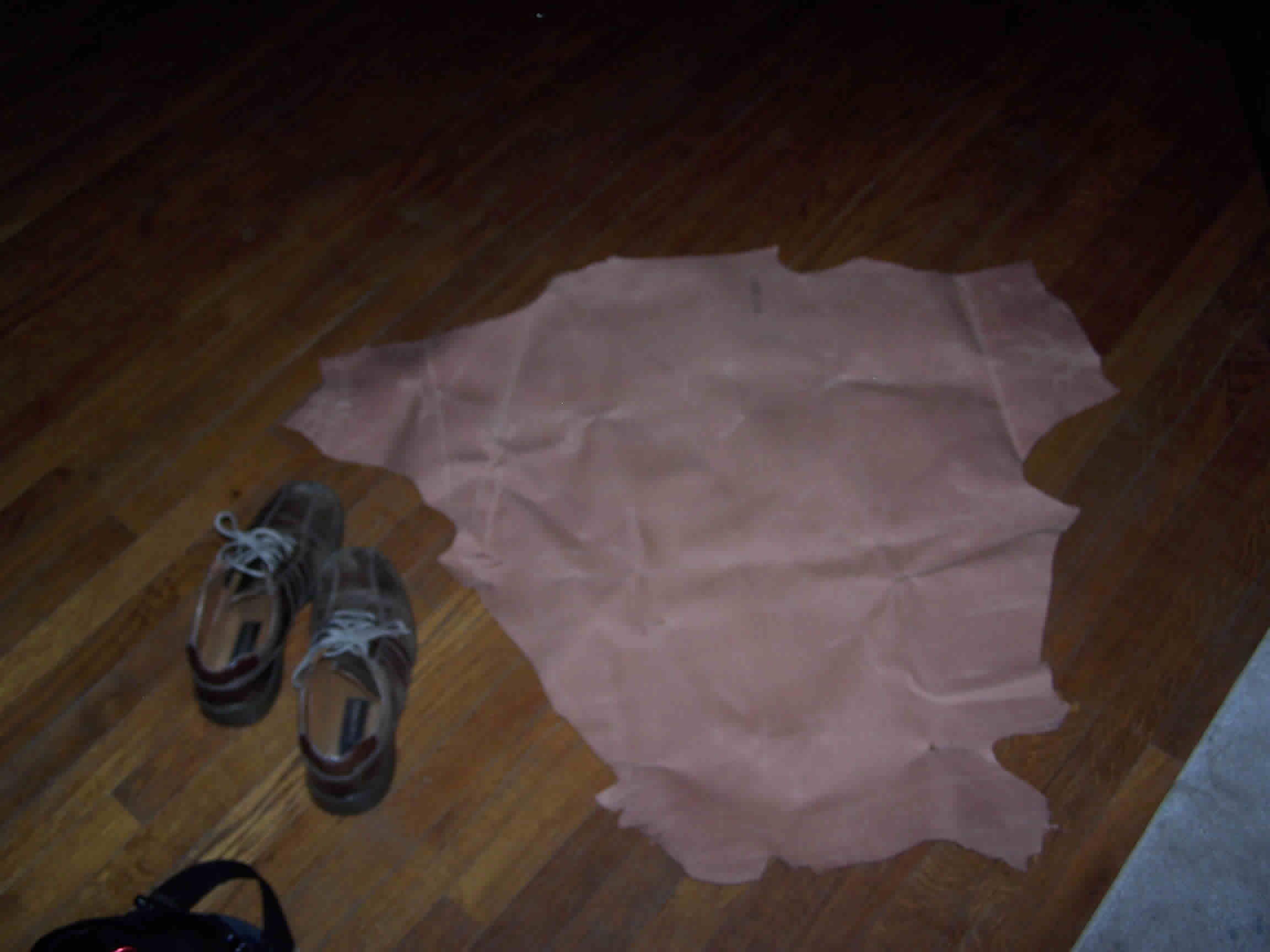 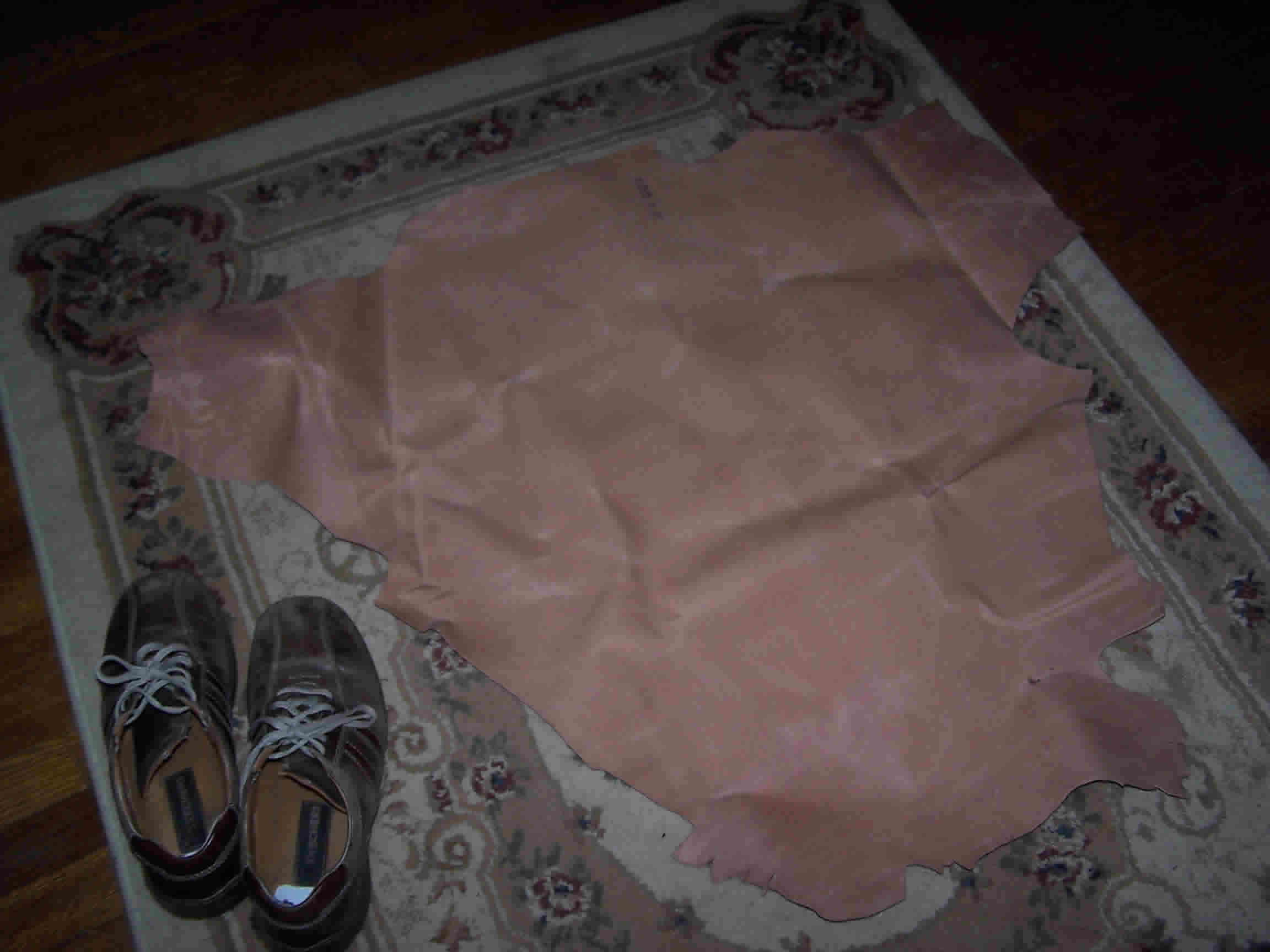 Here is the Kip hide I bought online. This one was huge and smelled awesome. 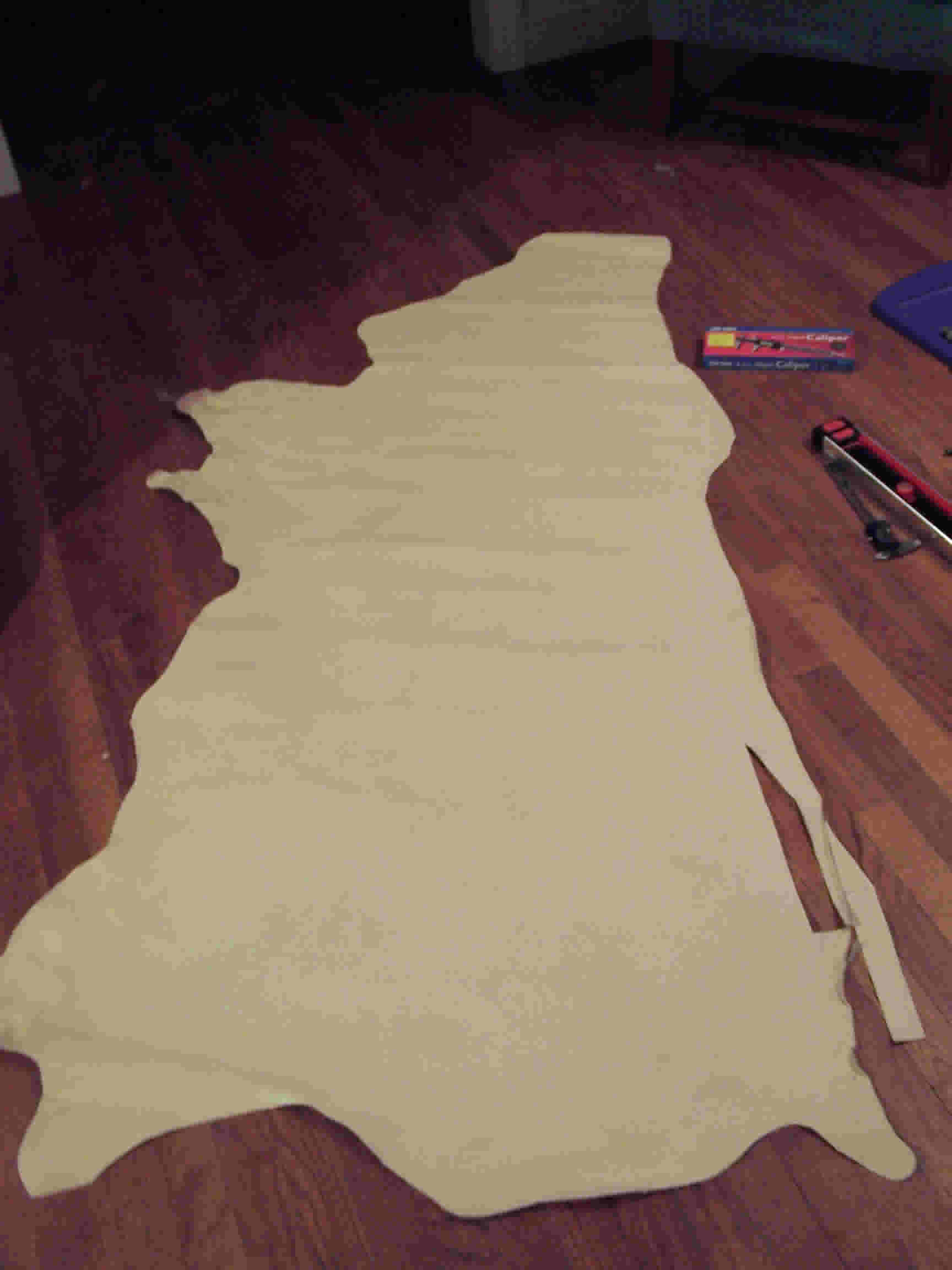 I drew the strands of the first belly before I cut them. This took an enormous amount of time and my sketches didn't really provide a good line to follow with the knife. 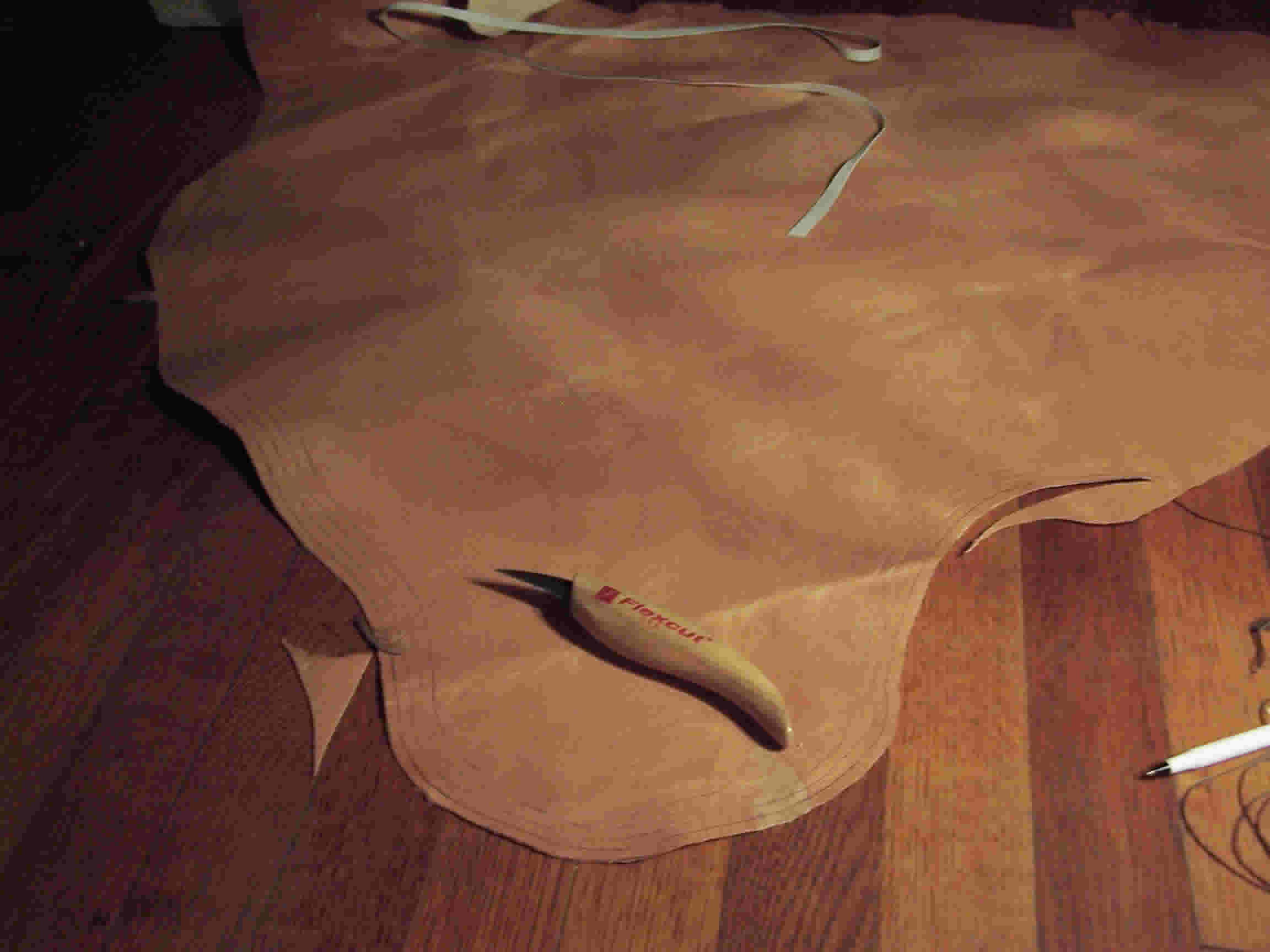 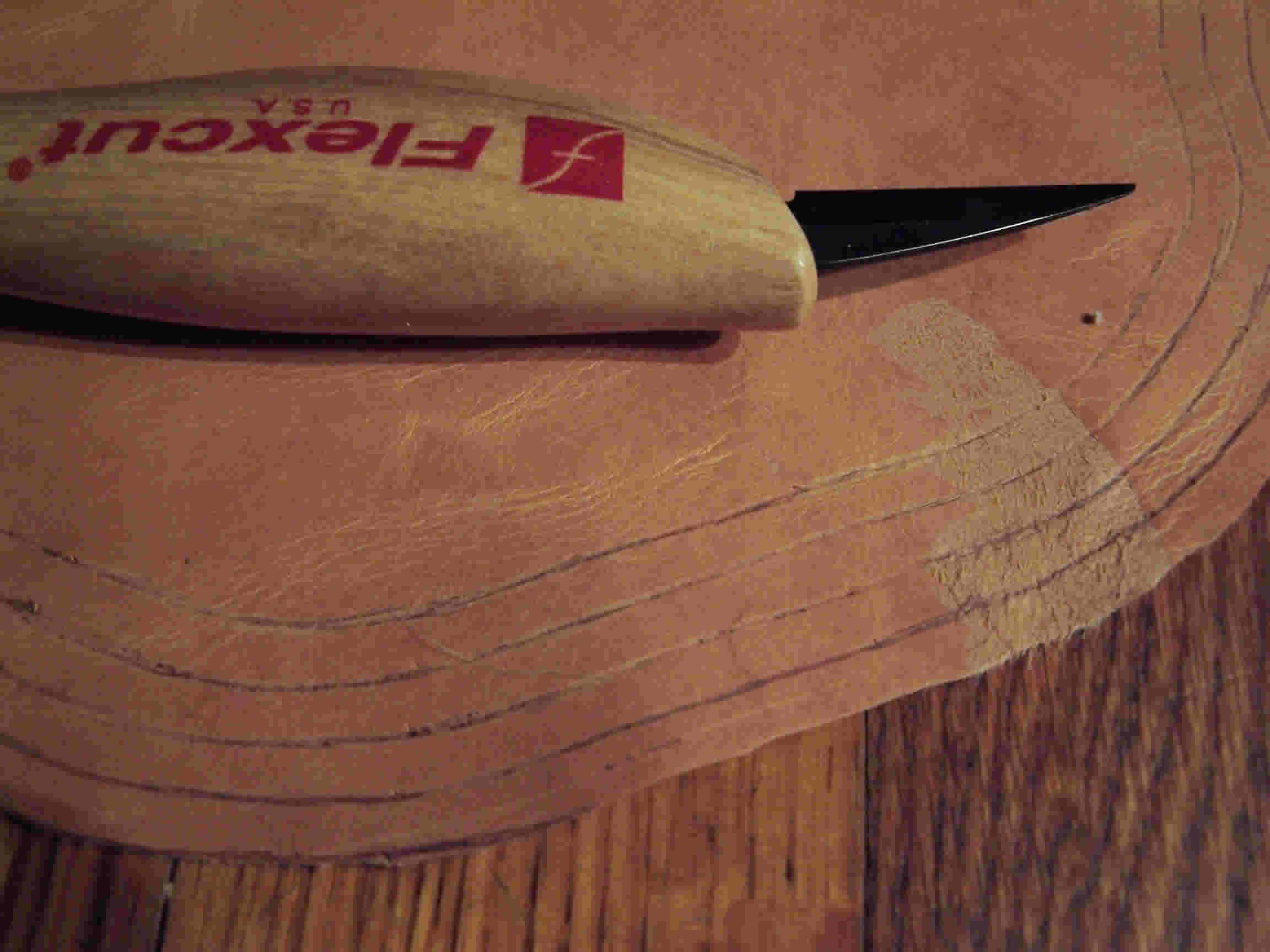 Cut out first belly. One thing I've learned: Don't make sharp turns when cutting the leather. Somehow, despite how many times I read not to do this, I ended up with several sharp turn in my strands. These can't be stretched out enough to eliminate the 'hill' that results in one side on the strand at that point. When braided, these hills show up. 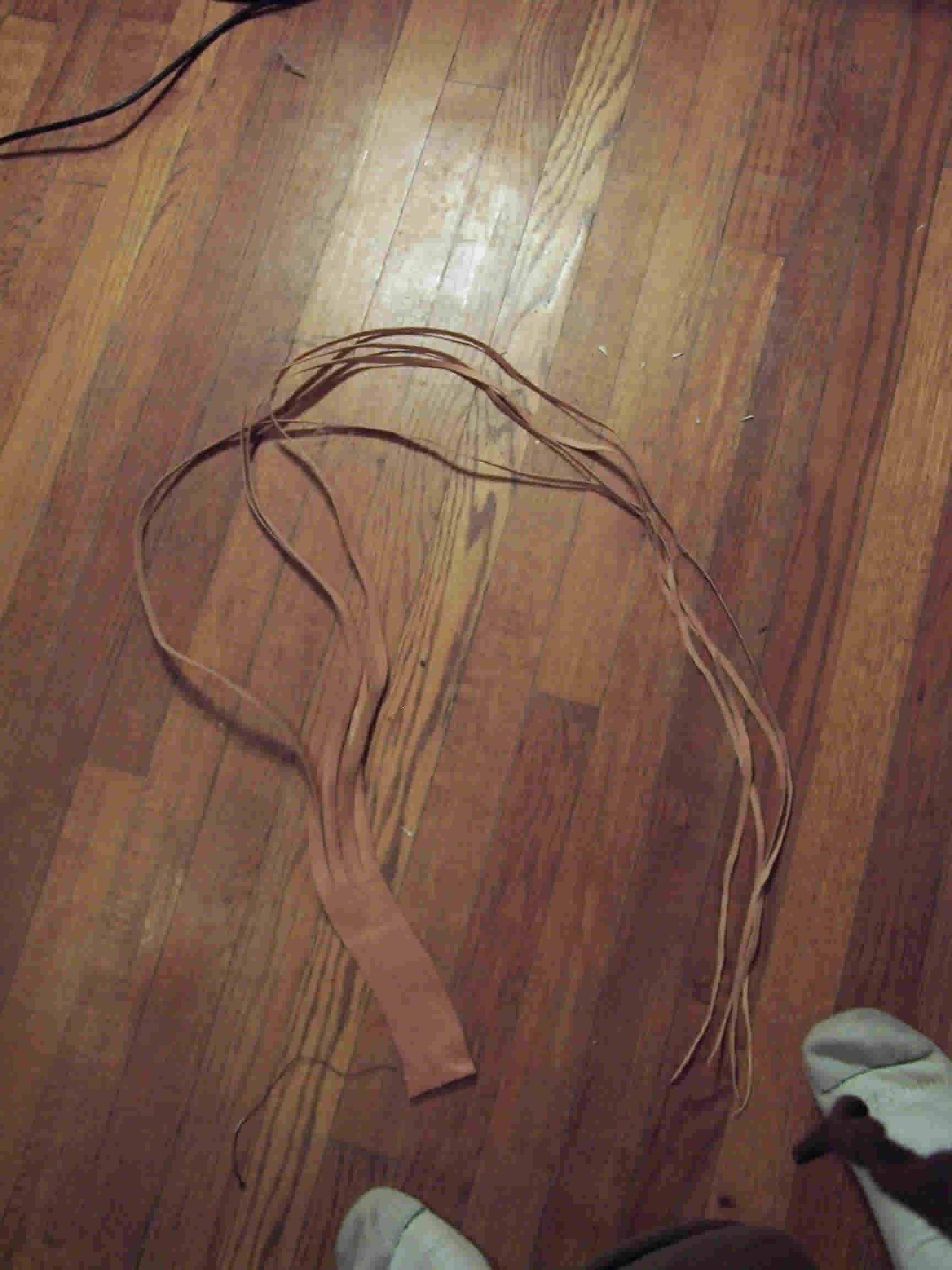 To stretch out the leather, I shut one end of it into the door jam, cake on the Pecard's leather dressing and pull on it. 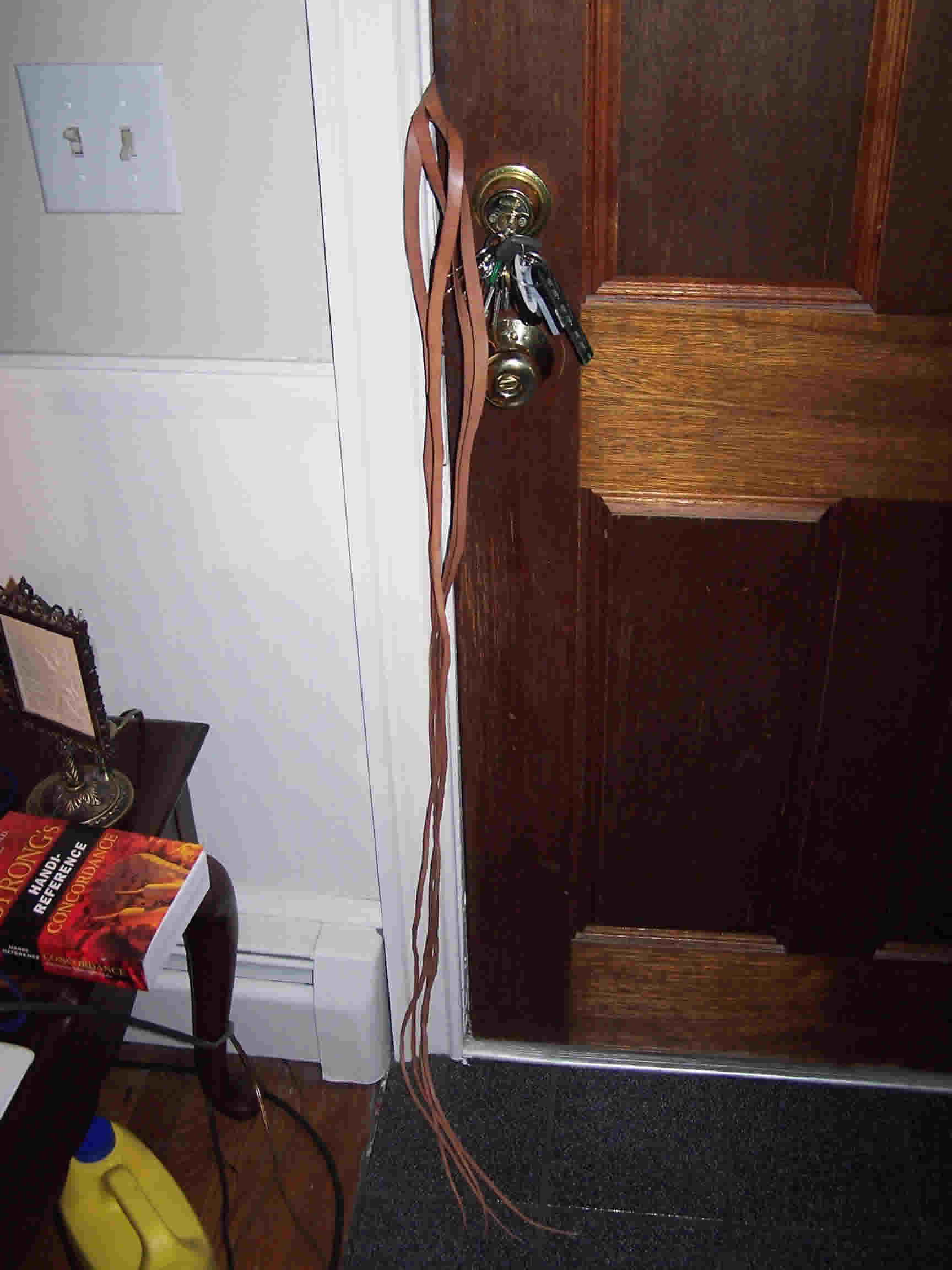 Here is the braided first belly. 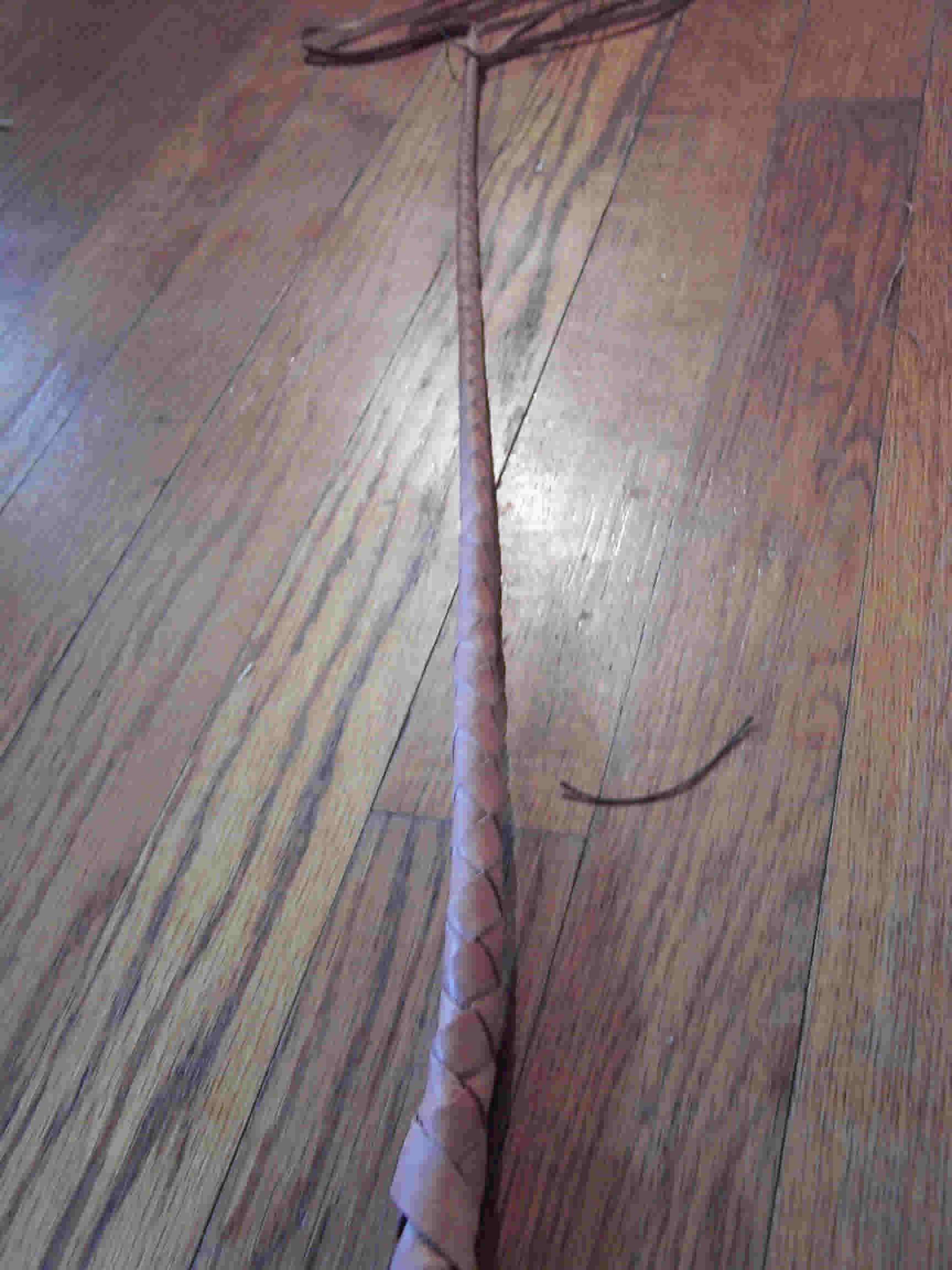 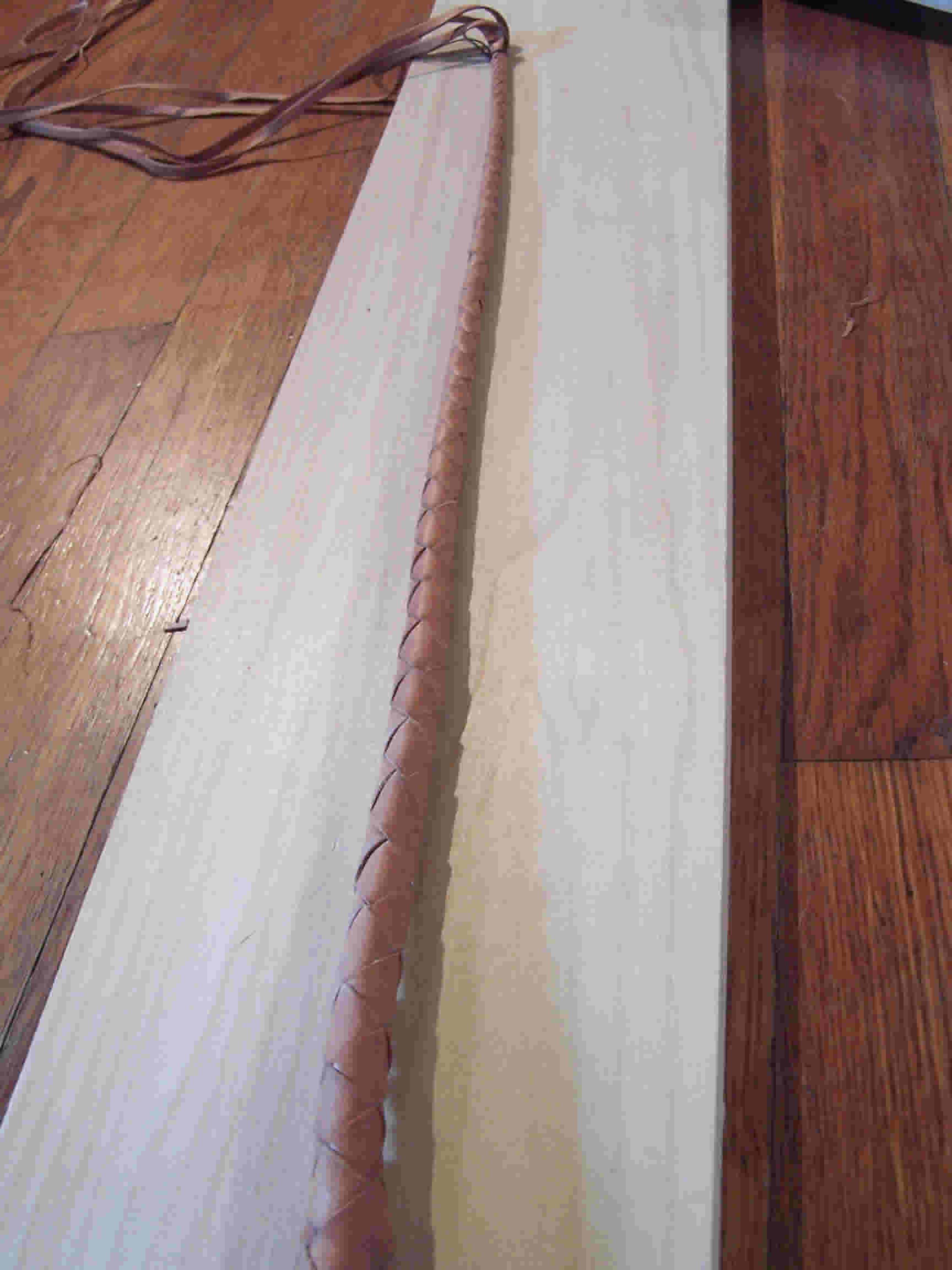 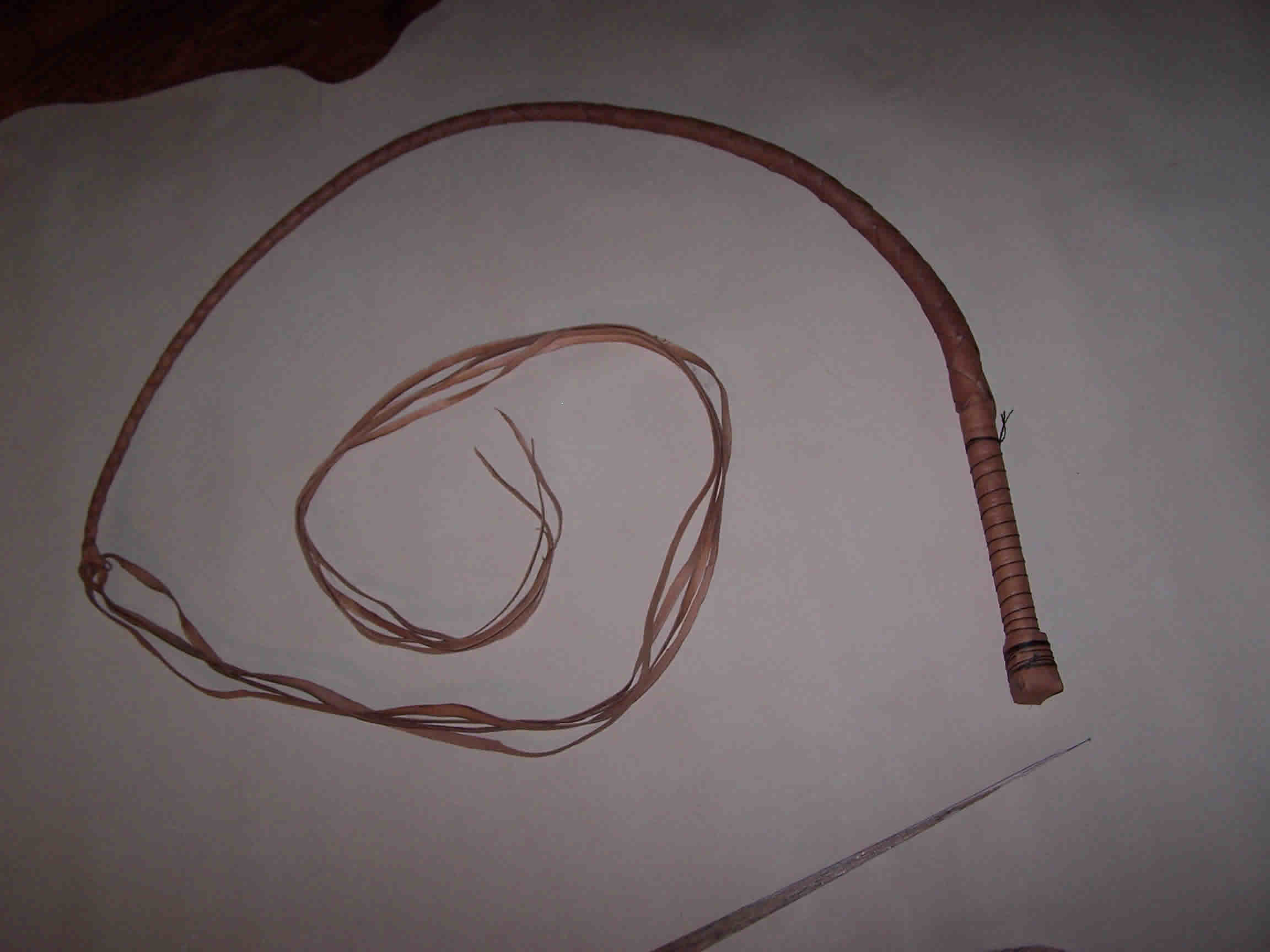 Cut out overlay. This is 12 strands and man this took forever. Stretching and beveling the strands make a world of difference. I really struggled with beveling initially but I think I get a little better at it each time.

Per Louie's suggestion, I've been cutting all 12 strands together, several inches at a time. To mark where to cut, I've use my calipers and set the width needed and just 'scored' the leather along the edge before each cut. I'm measuring the length of the strand before each cut… then interpolate what the thickness should be at that point in the strand, and then use a single width for that particular cut of about 8 inches or so. I'm getting significantly better at cutting thankfully. I've been using a box cutter per Louie's suggestion. To prevent the 'stuttering' that had been causing me so much grief earlier, I've been kind of spotting or pushing along the blade with the fingers of my right hand that aren't involved in holding the leather. Be sure to not stop the cuts of the 12 strands right even with each other… stop several millimeters earlier with each proceeding cut. I found myself in situations where I had to make a sharp turn with a cut and that forced the remaining strands to have to turn sharply also. 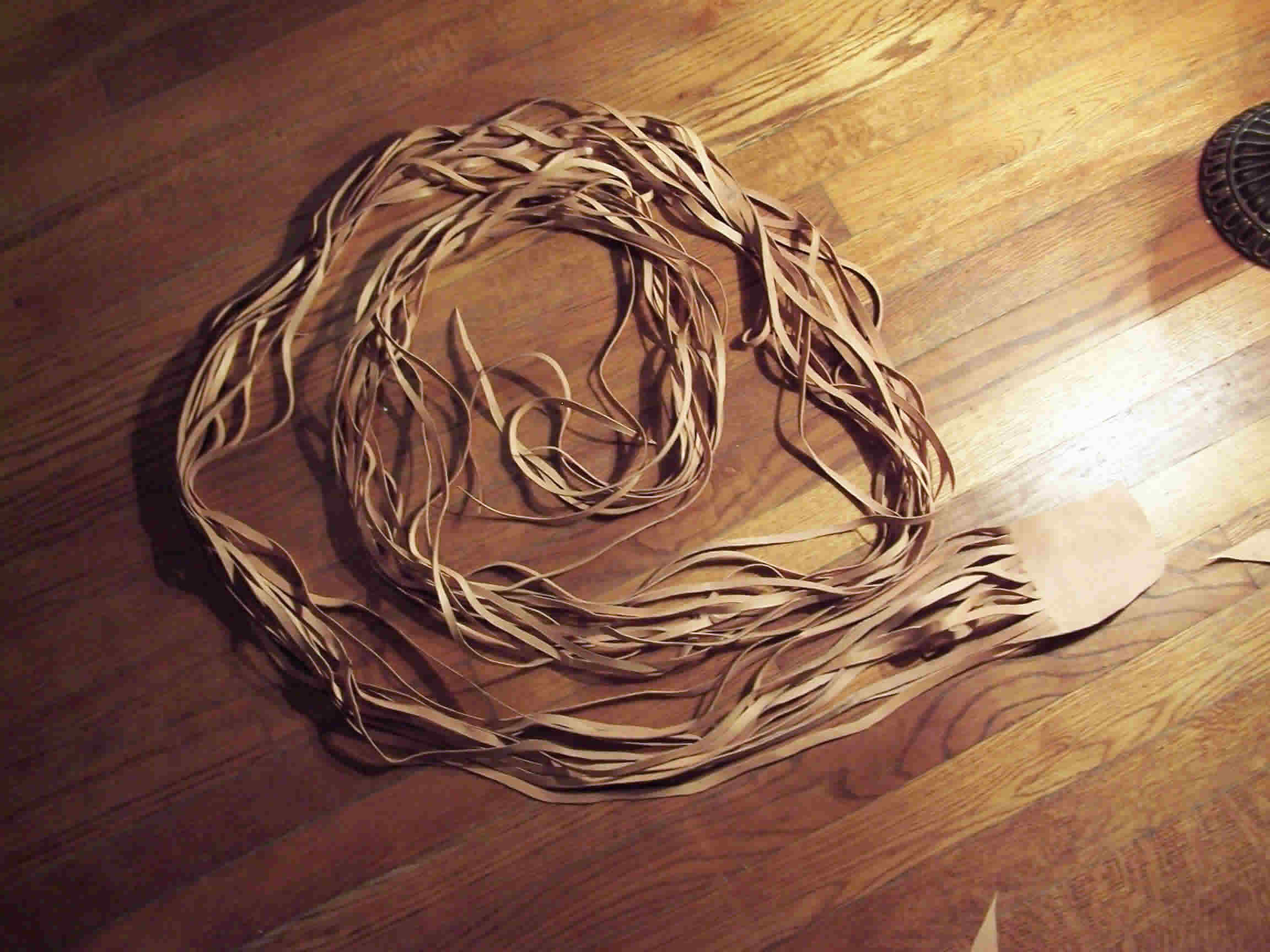 Overlay attached to the whip. 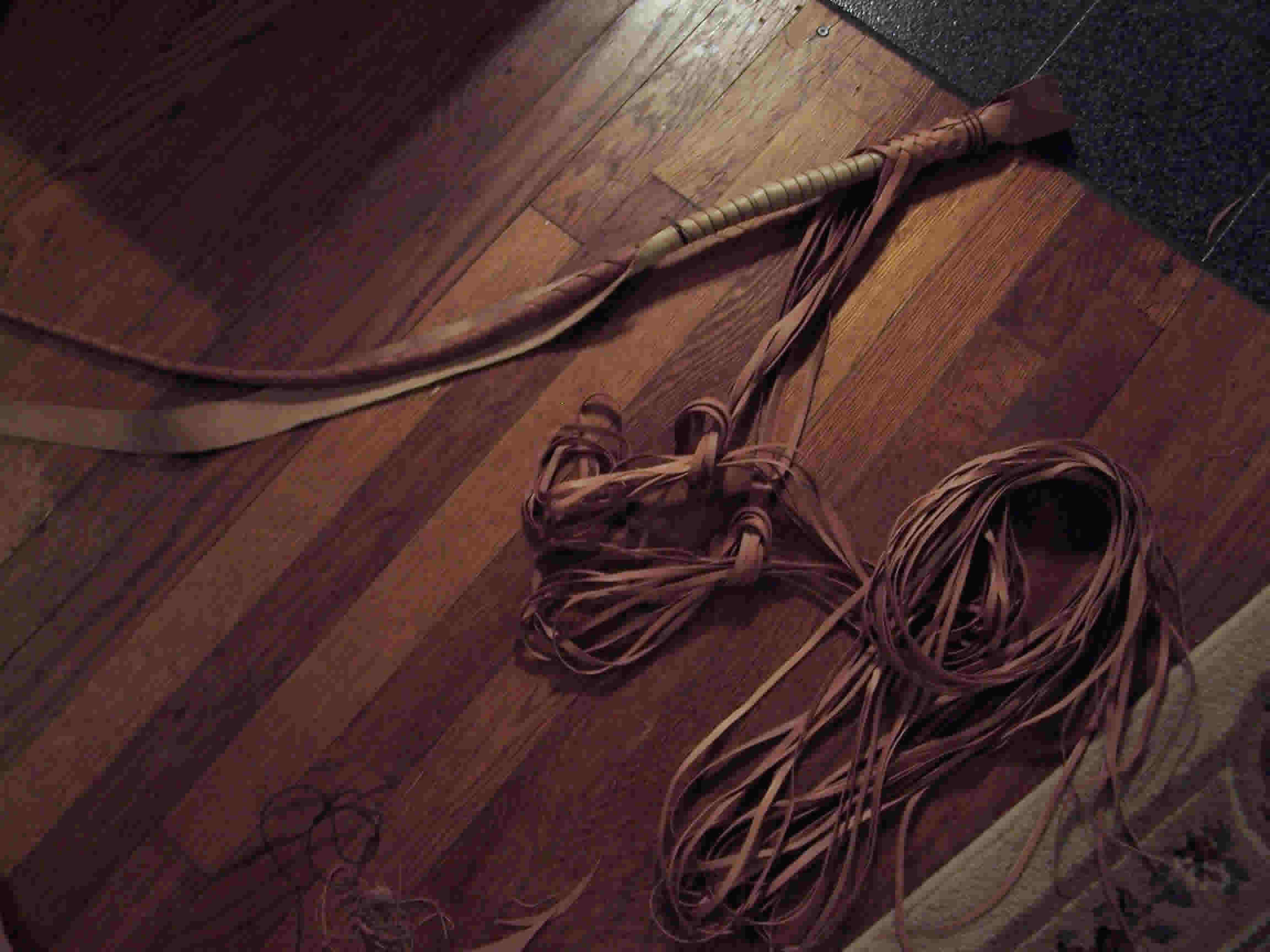 Finished bullwhip (minus the transition knot and the coat of shellac) I completely ran out of roo after the butt knot. (haha) 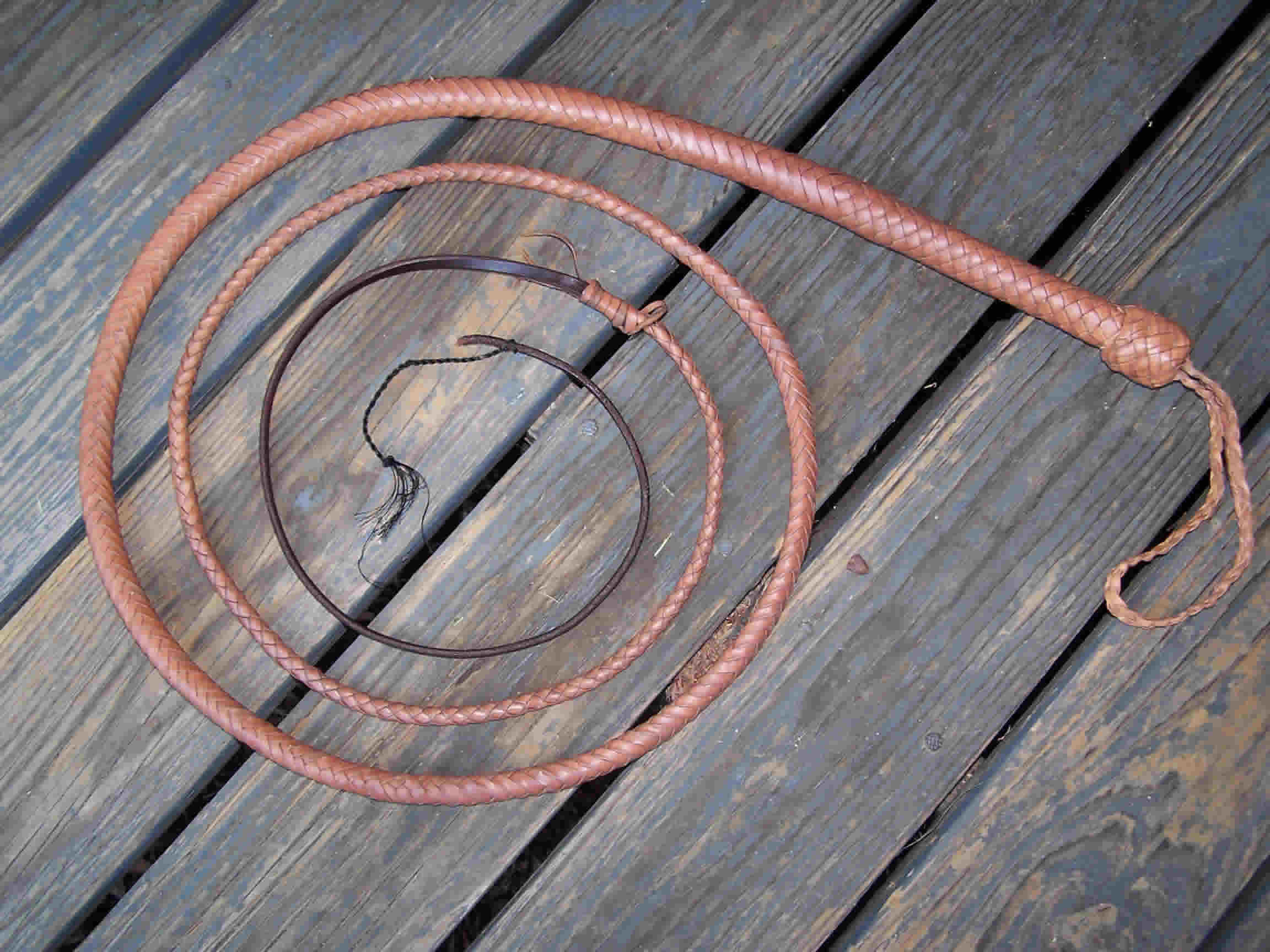